Hey guys! I have done sketches and things! Look at my things that I have done!
First off, here are some sketches I did today of some lovely noir ladies. The first one I started off using this technique of penciling out the angles which I got from this video. It seemed like an interesting idea, so I tried it out. 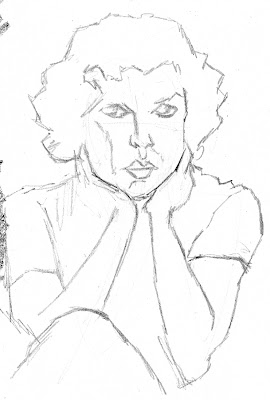 It was an interesting exercise. I should try it out more. Then I did a more fully rendered version which I'm pretty proud of: 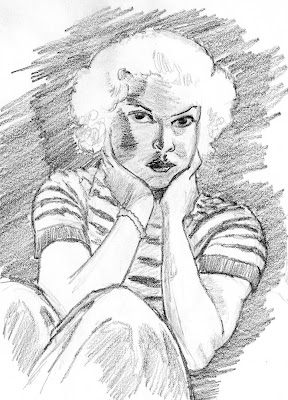 First I did this semi cartoony sketch of Rita Hayworth: 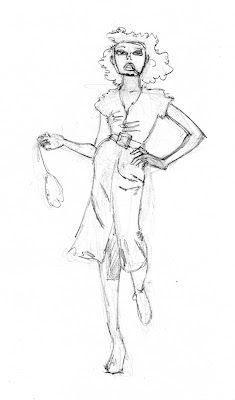 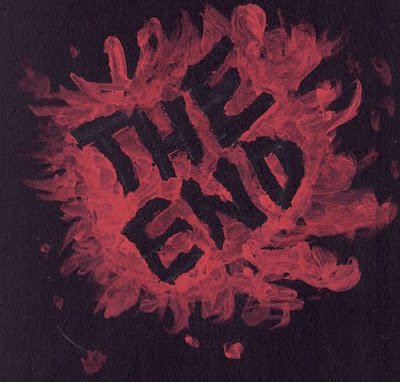 Hey guys! I've finally finished my Fiction Project journal! So relieved. I'll have more time to not worry about that now, so more time for comics and animations and all that jazz(maybe)!
It's pretty rough (I didn't even erase the pencils) and near illegible. I'm most likely going to post it here or make a new Tumblr for it. I'm not happy with it enough to post it on Rocket Powered Dragon with my other webcomics, but people still might enjoy it.
Also if you noticed at the left, I added a button for Rocket Powered Dragon! If you haven't checked out our stuff, you should!
I also finally got to playtest the newest version of my Rickety Rat boardgame. It was semi successful, but still needs to iron out some kinks. I'll do a post o the Rickety Rat blog soon.
I have plans to keep busy this week, so Look out for a new Barber, a new Purple Boy and Turquoise Girl, a new Random Awesome comic, and Sketched Screenings post! Plus more sketches and random junk.
Posted by The Noir Guy at 6:46 PM No comments:

Hey guys! I did stuff today!
So first off I have a bunch of new card designs, which is great because I'm really digging the style, but it's bad because I have so many I like.

The first I'm going to put on the back of all my cards. It's for the site I'm working with, Rocket Powered Dragon. And since I don't want to carry 2 sets of cards around, I'd figure I'd fashion one similar to the style of card I'm using. 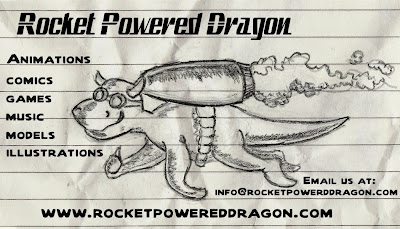 Oh hey, remember when I said I would post on this blog everyday? I might have been lying in the face there. But I will be positing to day because I have stuff today(and hopefully I will have stuff tomorrow as well)!

First, yesterday was Mother's Day, and I made my mom a card like I always do! I hate making cards WITH A FIERY PASSION but no good gift comes without some strain, right? Plus, I figure whatever I do, even if it's just a silly doodle(which I should be pretty good at since I do them all the time), it'll still have more heart than a store bought hallmark one. 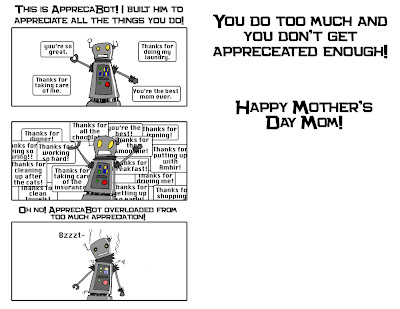 Next, I did some sketches of this random guy from Esquire magazines. I've been known to swipe magazines from family so I can sketch a particularly nice face or pose or body. This guy I mostly liked his face and pants. He had really nice pants. 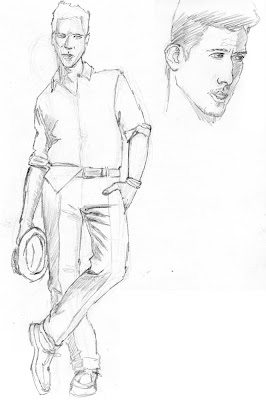 Look at the creases on those suckers! WHAT. That's what I'm talkin' bout.

Also I did some random robot sketches, because after seeing the rigs at this FREE RIG BLOG(fuck yeah free rig blog) I felt like making a kick ass robot in maya with some cool rigging and animation. Because, y'know, I can just do that on a whim, it's not like it'll take over a month or anything. 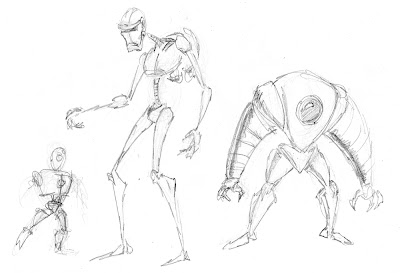 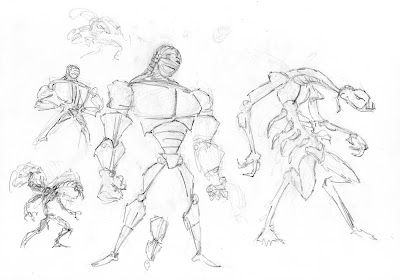 I have a general idea of what I'd like, possibly some barrel chested machina with some cool transforming weapons. The problem is with out a purpose there's no character, and no character makes for lousy design. So I'll put this on the backburner to think about.

Lastly, I'm going to do a Sketched Screenings post tomorrow(hopefully) on Thor, and I finished the sketching and inking. I'll color and post it tomorrow(again hopefully). 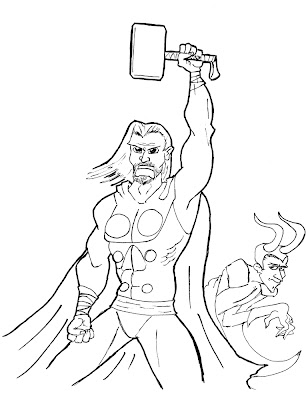 I took a little liberty and relied more on the ultimate comic version. You're welcome ladies.

Hmm, blogspot's been kinda wonky lately. I may look into better Tumblr options.

Hey guys! Did you check out today's Purple Boy and Turquoise Girl yet? Well you should! It's totally cute-dorable! Here's a preview:

This time I inked it with a semi-brush pen and scanned it in. It was waaaaay faster and I've got a much easier time making solid curvy lines, but the lines aren't as crisp when I bring them into photoshop. Then again I work on such a huge scale and scale it down when I import it, maybe no one will even notice. What do you guys think? Is there a noticeable difference between this comic and previous comics drawn completely in photoshop?

I also have new card designs! Yesterday when I uploaded the image of the assassin, I thought it was nice and interesting and had just the right amount of space for information, so I turned it into a card! 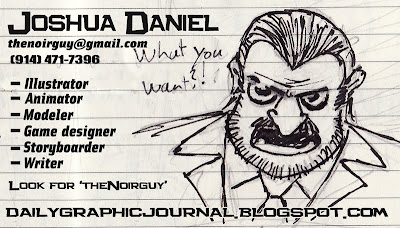 I like the slightly yellowed lined paper; it gives a nice sketchy cartoony feel close to the style I like. So I made some more variations: 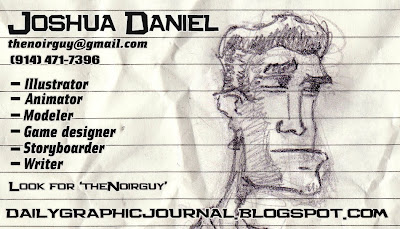 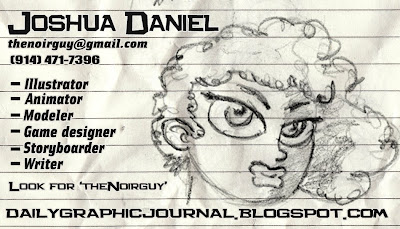 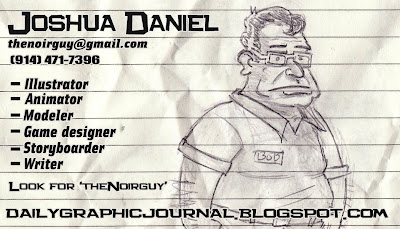 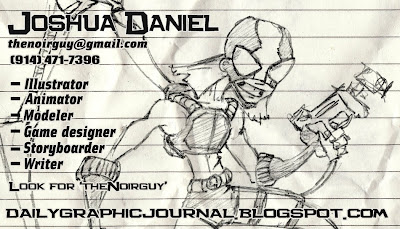 And finally I used it to do a variation of the card I have now: 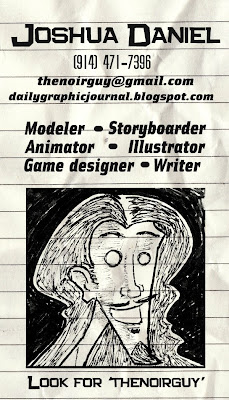 So what do you guys think of them? Good idea? Bad idea? Is all the info clear? Do you have a favorite? I may do a couple more if I find some more sketches of mine I really like.

I've just realized that almost 2 years ago I created this and called it "Daily Graphic journal", and what with the new Rocket Powered Dragon website up and subsequent blog, I haven't been doing much daily updating. Well no more! I can at the very least update on what's going on in my other comics and blogs and give some sketches here and there.

It's Tuesday! And that means there's a new Brother Rabbit and Acquaintances! You should go check it out, but here's a preview here: 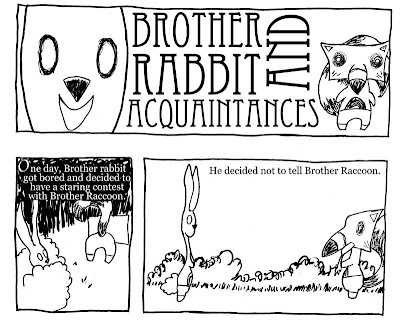 Yeah, I did the sideways dialogue thing. Not because I want to be a fancy shmancy typographer, it just fit in that space that way. What do you think? Too mainstream?

Also I have some pics of backgrounds and of boards over at my Rickety Rat blog.

Also also, I've been doing more work on my sketchbook project, and I'm getting close to being done. I may put it online as a webcomic type organism if I like the art that much. So far, I only feel meh about the art though. But here is the cover and some bits of art: 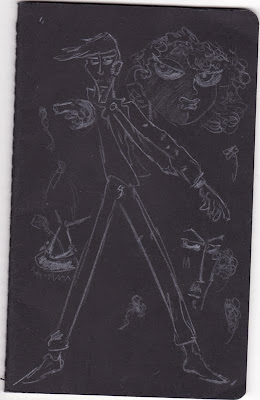 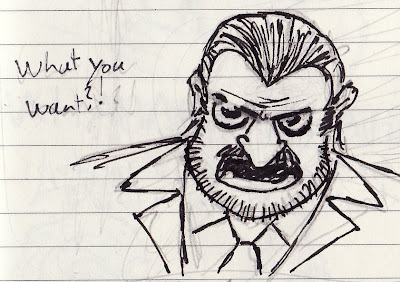 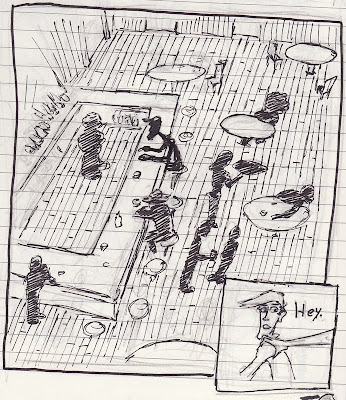 I like the slightly tan of the page with all the lines. I'm considering making a business card of the second guy.

Also the third, I want to make a Random Awesome comic this week entitled, "A Man of Science". I've been working on the main character and I just can't get his head shape right. Here are his many incarnations! 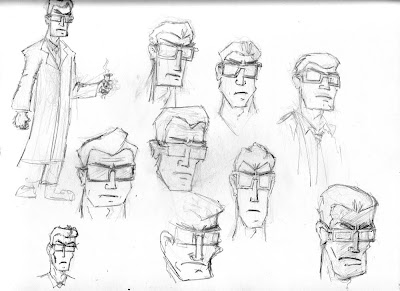 I will probably do an in depth post of his head on the RPD blog. I'm also going to try to do a Sketched Screenings post this week. Sometime. More stuff to come!