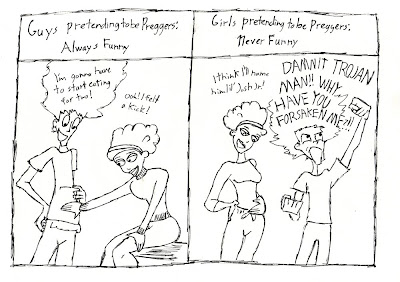 I'm pregnant...and YOU'RE the father! DUN DUN DUN!
Posted by The Noir Guy at 7:16 PM No comments:

You're talented! Why don't you have a job? 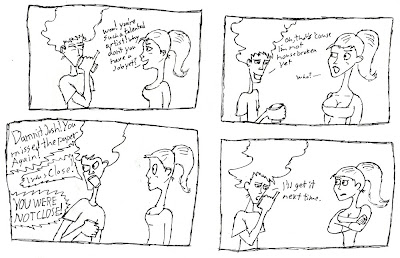 Y'know, someone reading these comics would probably get the idea that I talk to different women all the time. How wrong they would be.

Anyways, I've been reading a number of drawing books and trying to improve my skillz(pronounced skillz), so if there's a noticeable change in style, AWESOME!

I probably won't have a comic up tomorrow(but maybe I will!) as I'll be attending my friend Sean's band, Pretend Mad, at their premiere performance tomorrow all the way up in Yonkers. They totally rock and I totally designed a logo for them. You should go up there and buy a T-shirt from them for these very reasons.
Posted by The Noir Guy at 9:08 PM No comments: 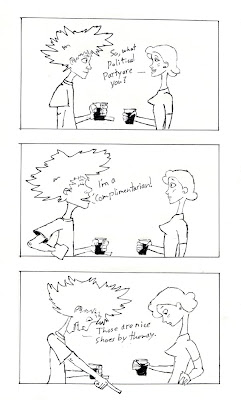 That's right! Join the National Complimentarian Party today! Don't wanna join? Well I'm sure you're still swell people. But look at the advantages! Never talk about politics with anyone ever again! After they ask what party you're in, immediately segue into a compliment! You're welcome people who hate getting into ridiculous political discussions!

In other news, have you checked out the "favorite webcomics" section and the "free useful programs" page? Well you should! And also tell me comics and programs to add to that list!
Posted by The Noir Guy at 8:29 PM No comments: 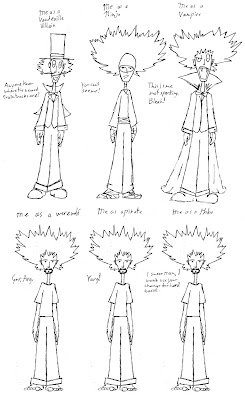 So most days I look like a werewolf pirate hobo. True story. If you're observant, you'll see I made a few changes to the blog! I added a list of all the webcomics I like (you should go read all of them now) and I made a separate page for free useful programs you might find useful. I thought this is good information to know (if you have any other free useful programs I can add to the list, tell me!). I'll probably add an about page or something orother soon too.

Hey, did you see the end to Lost? Wasn't it crazy when that thing happened and that guy did stuff? Yeah I totally know. I thought it was a pretty good ending but I would have done it differently. Which I will explain to you right now!

So in my version, after Jack would have become the new Jaccob, he, smokey, Desmond and Richard find their way down to the heart of the island and find some sort of electromagnetic nexus (Or something that scientifically explains the dharma project, electromagnativity, etc). Desmond and Richard accidently fall in and get obliterated, which causes a chain reaction and Jackob and Un Loche duke it out. It looks like UnLocke has the upperhand but the Ben comes out of nowhere and sacrifices himself to save Jackob. Jackob defeats the UnLocke but he's mortally wounded and the island is falling apart. He tells the others to get to safety while he stays and dies with the island.

They all get to the plane and are trying to get off, but it's not working. Then finally they take off, only to get pulled back down from the massive exploding electromagnetic nexus. The plane crashes, and the island sinks to the bottom of the sea.

Suddenly in the side universe, all the characters are at the concert and simultaneously get the flashbacks and all sort of remember at once (instead of individually) their lives on the island. Then they have all the teary eyed reunions and Sawyer goes to Jack and says, "Son of a bitch, it worked." Then they all see Desmond standing there smiling like he knew all along, with Richard by his side. They're all happy (INCLUDING WALT AND MICHAEL) and go about their respective lives).

Then in the last five minutes, we see Jaccob and The man in Black sitting at a coffee table in a cafe with a game of backgammon. Jaccob says, "See ____ (finally telling us the guys name), I told you they could do it." Man in black says, "Yeah, I almost had you. You win this game. But next time, you'll have to watch out." Blackout.

That was my little fan fiction for the night. But that's just my take. How would you have ended it?
Posted by The Noir Guy at 12:50 AM 1 comment:

I can haz job? 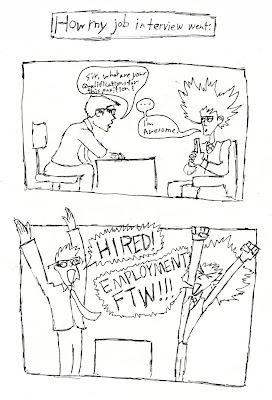 No really, that's how it went.

Ok, so maybe it wasn't quite like that. But it was a good semi-pre-interview and I really hope I get it. Working at the library would make me happier than having 12 360's. But then again, what would I do with them all?
Posted by The Noir Guy at 8:51 PM No comments:

the rabbit and the raccoon 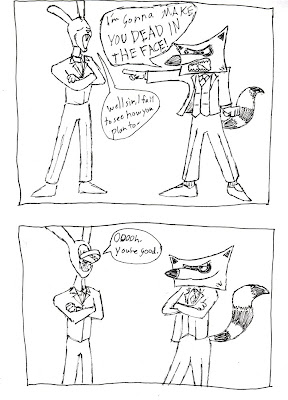 y'know, these were originally people, but then I realized I had to draw faces, so they turned into a rabbit and a raccoon. I have to admit, I rather enjoyed drawing a raccoon in a pettycoat. I don't know why I like putting cartoonized animals in fancy clothes.
Posted by The Noir Guy at 11:02 PM No comments: 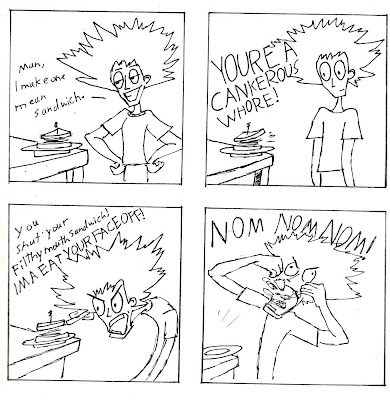 I do make a really good sandwich.

Hey, do you now about My Cardboard Life? Well if you don't you should! It's a wonderful and creative little daily strip, and I'm doing a guest strip for her 300th comic party! How awesome ins that?! I'd say it's fairly awesome.
Posted by The Noir Guy at 9:30 PM 2 comments: 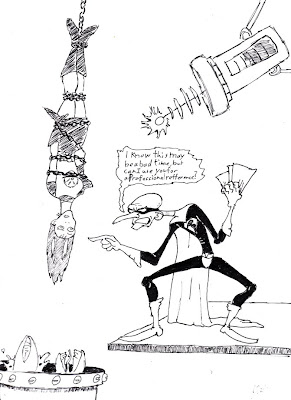 Some people have no tact.

But also, I've been trying to practice and get better at exaggerated cartoony characters. Ergo this comic.
Posted by The Noir Guy at 8:53 PM No comments: 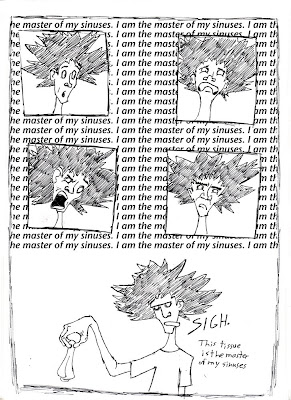 No seriously, if you're about to sneeze and you don't know if you're going to, hold up a tissue to your nose and it will scare the snot back in!
Posted by The Noir Guy at 12:09 AM No comments: 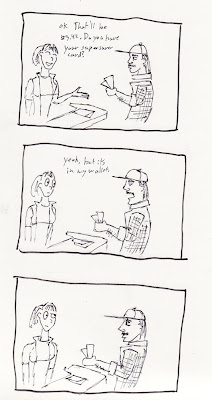 No seriously, this guy actually said this. And he asked for the discount anyways. I was stunned at his a) lack of thining to get it out before hand and b) his laziness to reach in his wallet again.

But then again, with linework like this, who am I to judge on laziness?

Oh, and also, I'm incredibly close to finally getting my barber comic up and published! It's a real webcomic! Not some thrown together facade like this!
Posted by The Noir Guy at 11:19 PM No comments:

Man, I'm still sneezing like crazy. It's ridiculous. Oh, also I'll have a flash tutorial about using the line tool up on my Rickety Rat Blog tomorrow. You should check it out!
Posted by The Noir Guy at 7:24 PM No comments: 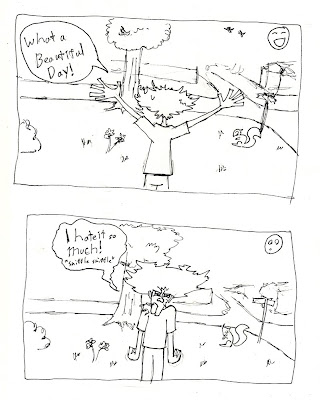 I woke up today, my eyes were itchy, my nose and ears were stuffed up, my throat was filled with flem, AND it was a horrible day out. How is that fair?
Posted by The Noir Guy at 10:23 PM No comments: