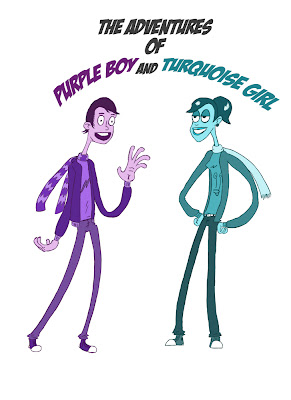 Hmm, I haven't done a comic in awhile. Still doing other stuff. Other stuff like this! This is Purple Boy and Turquoise Girl! They're a couple. A couple of weirdos! I actually got this idea from seeing an actual young couple on the subway of a guy who was wearing purple and a girl who was wearing turquoise. I just wanted to do a dramaless comic with a couple who act like idiots together. So, perhaps expect something of that nature in the near future.
Also other stuff, I have a new blog! It's called Sketched Screenings and it's movie reviews and I sketch stuff and you should totally check it out and follow the crap out of it.
Also also other stuff, it's snowing! But that doesn't have any real affect on my art or your view of it. DOES IT?!
Also also also other stuff, I'm teaching myself after effects this week so I can make kick ass titles and videos like on Bad Universe! The show is utter bullpoop but I enjoy how they use the After Effects in the cartoon segments.
The guy's all like, "Could this happen? Who knows! Maybe!" but then the after effects promos are all like SHOOOM WHAAA GROOOMP and I'm happy. The problem with after effects for me is that it's not really a program, even if I know how to use it, that I can just pick up and make awesome videos with, I have to have a set idea and storyboards and finished artwork. So there may or may not be an awesome AE video later this week.
P.S. also also also, I've decided to do 14 days of Brother Rabbit Single Awareness Day Greeting cards! I actually have just enough. Expect that to begin next week.
Posted by The Noir Guy at 11:16 AM 2 comments:

Hey, I haven't made a comic in awhile, that's mainly because I've been busy trying to accomplish other projects and also I've been sick*. But i did do some sketches and stuff! take a look!
*cough cough 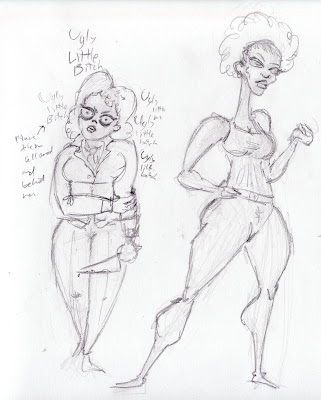 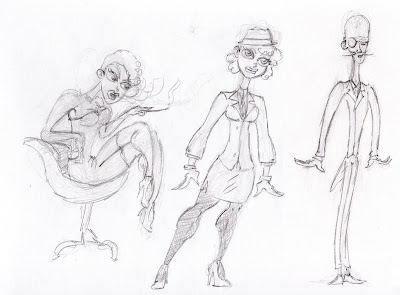 These are more noir sketches. I might do more noir comics as soon as I get a bunch of characters down and stories up. Or they might end up on another site. We'll see. 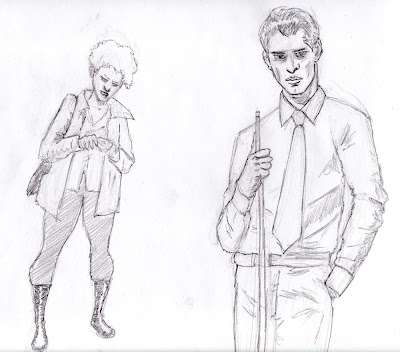 And these are some semi-random people I drew! One was in a magazine and I drew him when he wasn't looking.
I may have a new blog up soon. Having to do with movies and sketches. More on that soon.
Also I'll be making Brother Rabbit themed Single Awareness Day cards(or S.A.D. cards, tee fucking hee!), so look for those soon. I haven't decided if I'll do a bunch in one lump post or over an extended period. Do I have enough to do 14 days of S.A.D. Brother Rabbit cards?!*
*prolly.
Posted by The Noir Guy at 6:05 PM No comments: 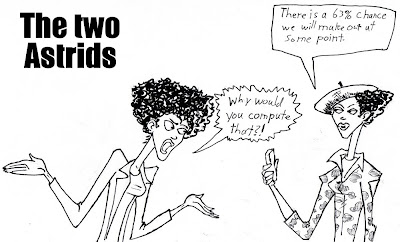 I didn't think I was going to do a comic today, but I just really liked cartoon Astrid. C'mon, you can't say you haven't thought of this. You haven't? Not even a little? Oh...well neither have I!
Posted by The Noir Guy at 5:54 PM No comments: 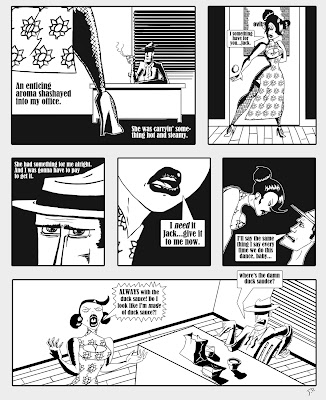 Oh hey! Y'know that comic I've been working on for a week? Finally finished it! This has been a long time coming honesty; I love noir, I make comics, why haven't I done this sooner?
I'm fairly happy with it overall. The comic is silly, but It's a nice little story. I need to work on the characters more, and the shading. I think my favorite panel is panel 3. In the future, all panels will be of beautiful women's lips and nothing else.
What do you guys think of the style and characters?
Posted by The Noir Guy at 11:12 PM 1 comment: 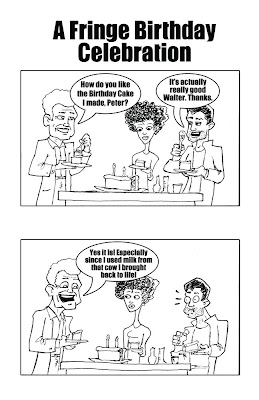 First comic of the new year! I wanted it to be something else actually, but I haven't quite finished it yet. More on that soon I hope.

This was for a Birthday Card for my dad, since he loves Fringe(and I am also a fan). Honestly, I could put anything in that last word bubble(though they bring back stuff from the dead every other week), and it wouldn't be any funnier than the actual show, what I like is Peter's expression. And here are some sketches! 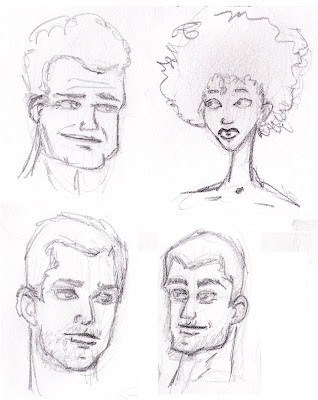 I had some trouble with Walter and Peter, but Astrid I got right on the nose first try! I guess she just has an iconic look.