Hey I did a redesign of the Birds of Prey over at Superhero of the Month! 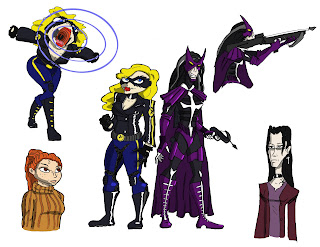 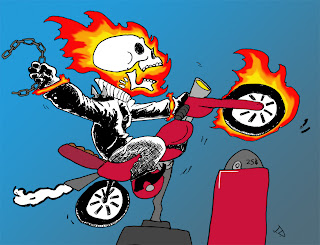 An adorable Ghost Rider sketch from my Ghost Rider: Spirit of Vengeance!

Something else different, I wanted to share a few awesome links to great tutorials and articles I found throughout the week!

To start it up, here's a blog from #AltDevBlogADay about constraints in design and how to keep it simple. It ranges from writing, to art, to game design:

Also from #AltDevBlogADay is this article on novelty vs. Familiarity. Basically, for someone to like something, it needs to feel familiar, but not so familiar that it's boring. You should also read his article on a functioning definition of beauty.

The Novelty Vs. Familiarity Complex

From Gamasutra, here's a nice article about five problems in adventure games and how to fix them. At the bottom of the post he has a number of other articles that I also recommend.

5 Adventure Game Goofs(and How to Fix Them)

Talented artist Grace Fong has some great exercises for artists to try out, and check out the rest of her blog for beautiful art and other helpful exercises!

Helpful Exercises for All

And then there's this, which is no tutorial or useful in any way, but if you slightly follow politics, and strongly dislike the candidate of Rick Santorum, then list of minor annoyances that people wish on him will fill you with glee.

What other articles and tutorials did you guys find?

Oh hey, I wanted to do something a little different.  I wrote a blogpost about videogames!

You ever play a fighter or shooter, something where your player character has to go up aginst a large number of enemies, he picks them all off, there's only one or two left, and you wonder why they still come at you? Even after you've just decimated their whole squad?  For example in every Batman game, every thug will run at you with whatever he has in his hands, even though he knows this is the Batman and and he's beat up thousands of thugs. Or take any shooter, you've taken out 20 squad guys, but that last guy still thinks he can take you on.
Doesn't this seem weird and out of place? It doesn't make sense in the context of the real world, does it?  Sure for a few cases it can be explained that these are all mindless monsters or robots, or hardened soldiers who are all willing to die for their cause, but for most people, common sense would dictate you run the hell away, right?

That's because in the real world, humans are genially programmed to survive. Unless they're all elite squad commandos ready to die for their squad, or some sort of religious fanatic who would rather die for the cause, the logical response to seeing 20 guys taken out is to run and/or hide. That's because we have lives, we have other things to do other than fight, we have other reasons that we're fighting for, and we have a base need to survive, whatever the cost.  Some cases would dictate that the best way to survive would be to fight, but other cases would dictate the best way would be to run away.

Game AI are not built like that. They don't have lives or any outside functions, and they're programmed only to fight.  Their only function in life is to kill the player, they have no other greater purpose or dreams or desires.  They are kamikazes. They are not programmed to care whether they live or die in any given situation.  And in some cases, as in with respawnable monsters or lego people who are all virtually indestructible, they have no reason to care.
Game developers may find this is pretty self explanatory, but think about what this means and what we can do with this. What if we made AI that was programmed to survive? What would that mean? Would they get stronger or more fierce if they were cornered and alone instead of with their group? Could the player scare them all off by taking out one guy really brutally? Maybe if the player killed the majority of enemies, the last one would go "oh shit!" and book it, never to be seen again? Think about how we could make games more realistic and change the player experience.  What then would the player do when faced with an enemy who runs away? Would they give chase or let them go? How would that impact the rest of the game or the personality of the player's character?

Just some things to think about.
Posted by The Noir Guy at 3:20 PM No comments: