Oh whoops I ran out of time yestrday to do a blogpost, so here's some sketches today! 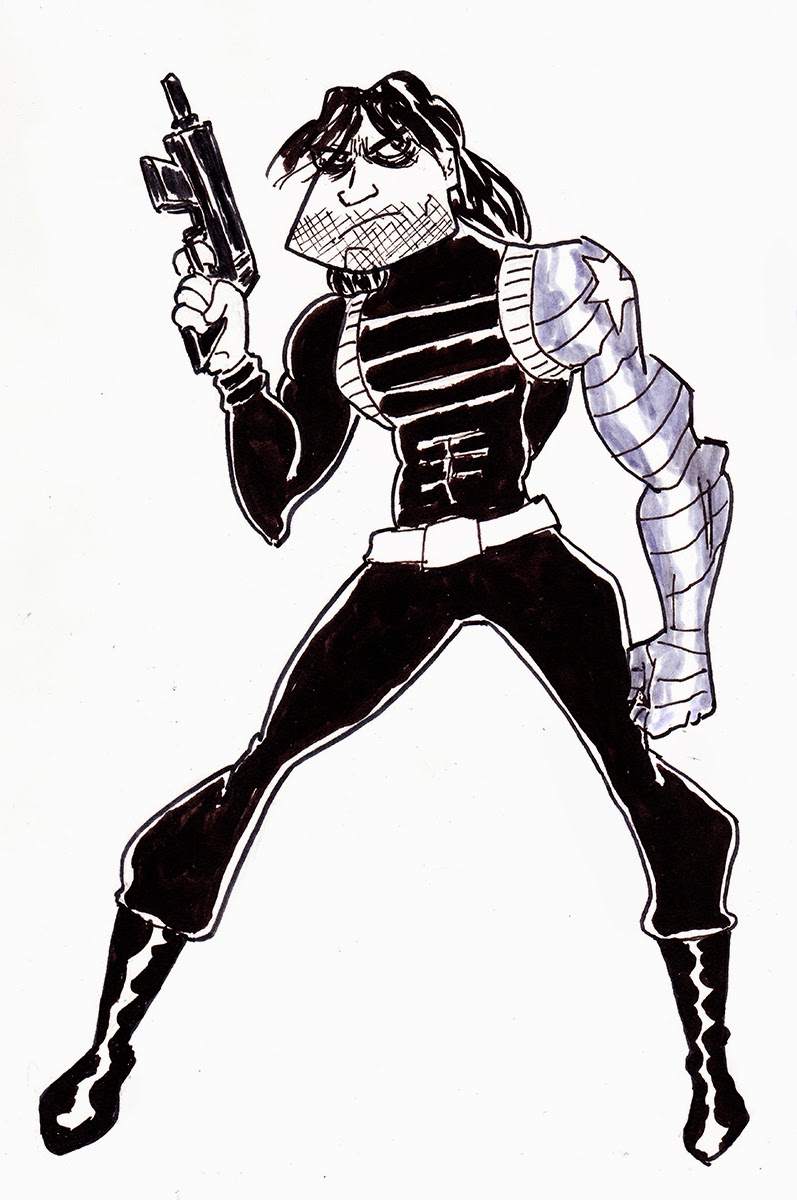 I was at MoCCA last week, so I wanted to go over a few of my favorite books that I’ve gotten through so far!

Heartless by Will Payne 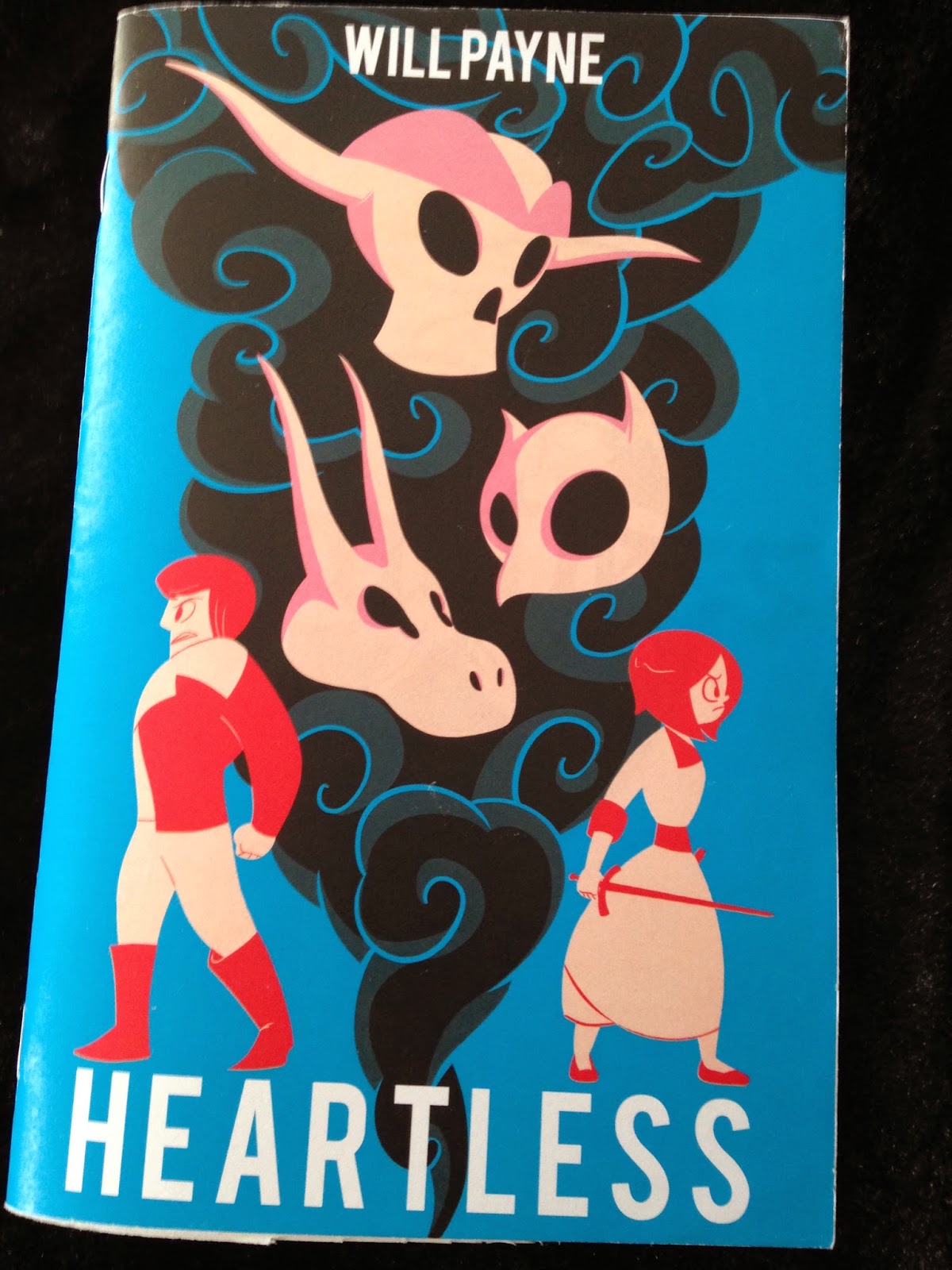 This is the first time I’ve found Will Payne’s art, because it’s a pretty great book. For one thing, it’s fairly lengthy comic(over 50 pages for an indy!) that’s completely wordless! It’s a fantastic way to show off his storytelling chops, and he pulls it off beautifully. It also helps cement an all-ages feel, which the light-hearted story seems to be going for. And for another, it’s got a female protagonist! In a fantasy setting! Saving her beloved! And it makes sense! It’s the story of a lady on a quest to retrieve the stolen heart of her fiance from a group of demons. It’s a really great story. The art style is simple, cartoony, and really lovely. It’s just a nice story that’s well-told and wraps up in a way that’s fitting where all the characters are satisfied at the end. It’s really good is what I’m saying. You can check out his work here, and if you want to read it, you can read the whole thing here, though I’d recommend buying it if he’s selling it at another con.

The Feast and The Godins by Anna Bongiovanni and Evan Palmer 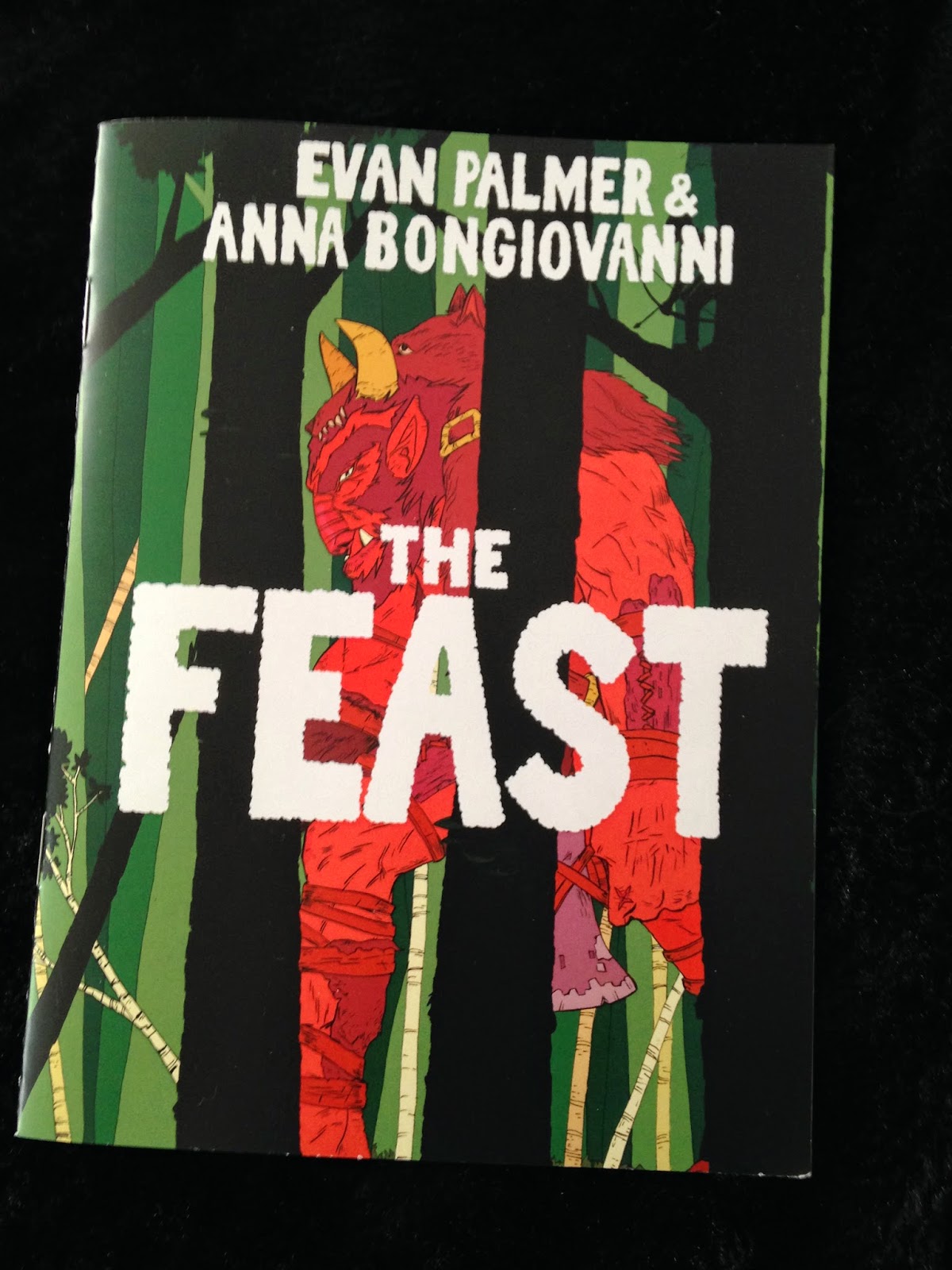 The Feast was written by Anna Bongiovanni, but both were illustrated by Evan Palmer, so I’m going to include these comics together. They’re both fantasy stories, and I doubt they take place in the same universe, but they’re both drawn beautifully. Palmer has a great inking style, a great handle on black and white contrast, and really cartoony expressive characters. The Feast is a one-off story about a group of orphan girls running and fighting a giant beast who has been hunting them. And oh look at that, not just one female protagonist, but MULTIPLE! That’s great. And since there’s a whole gaggle of ‘em, you get a range of ages and varying personalities with varying degrees of cute and badass. And they all have silly names like Gigglespeak and Mudbutt, because I mean, why wouldn’t they? 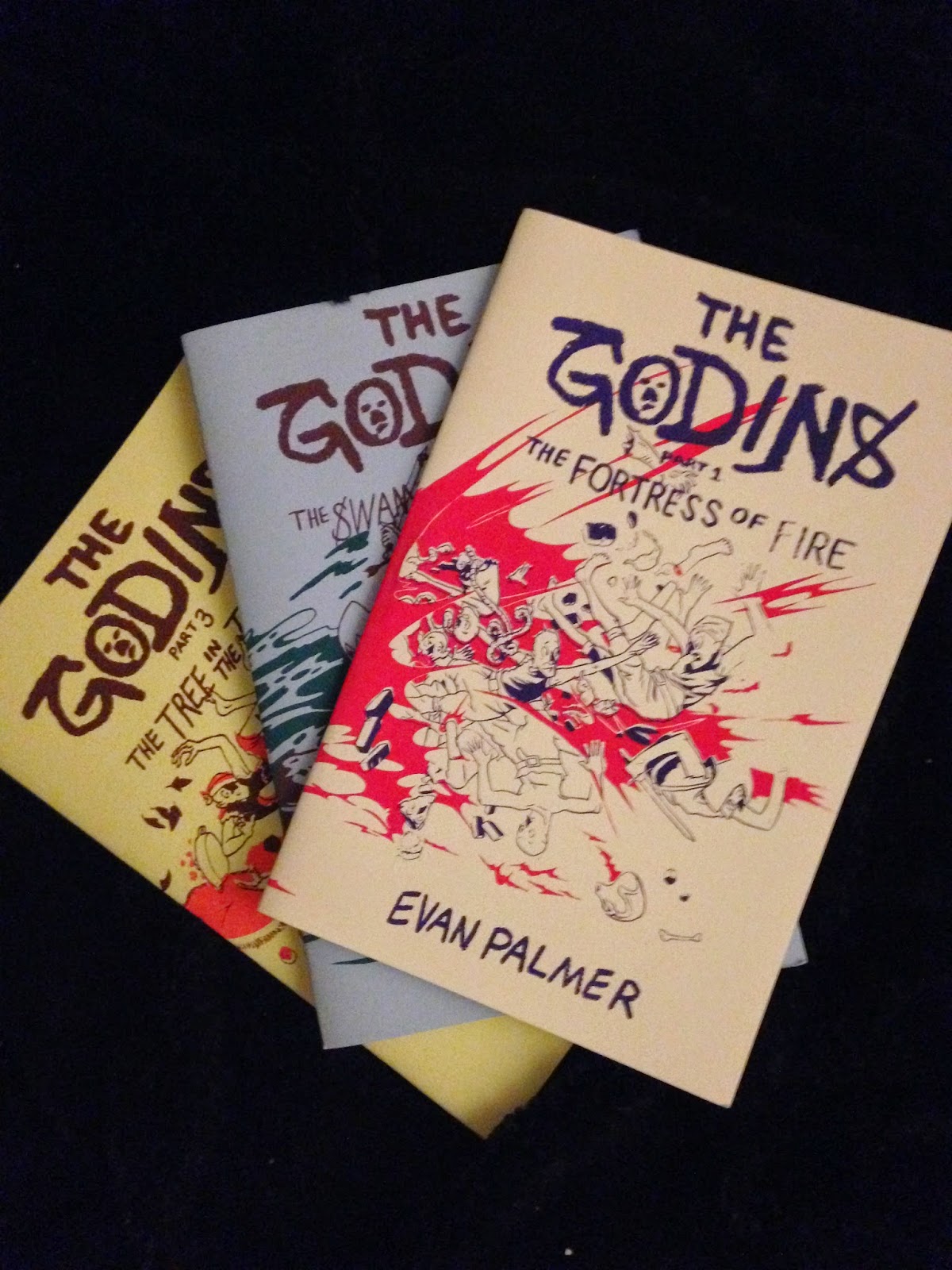 The Godins is a longer series with three books already out(there’s supposed to be 11 in the series) about a group of small creatures called Godins(similar to Goblins or Kobolds I guess?) on a quest to bring a girl to their lord, the Thunder King. It’s an interesting idea to have a story from the bad guys’ perspective, especially the four worst and weakest bad guys. And because Palmer is so great at characters, you really start to feel for these guys. And there are a number of great female characters in here as well. He sets up a world that feels creative and unique with creatures and classes similar to your regular D&D things, but with enough variation to feel original. They’re both beautifully done fun adventure stories, and I’d recommend buying them all. You can read them all on his site, or if you feel like getting some really gorgeous mini-comics, you can buy them all at Evan Palmer’s etsy shop here: http://www.evanpalmercomics.com/shop/ all the Godin books are 5$ and the feast is only 4$! 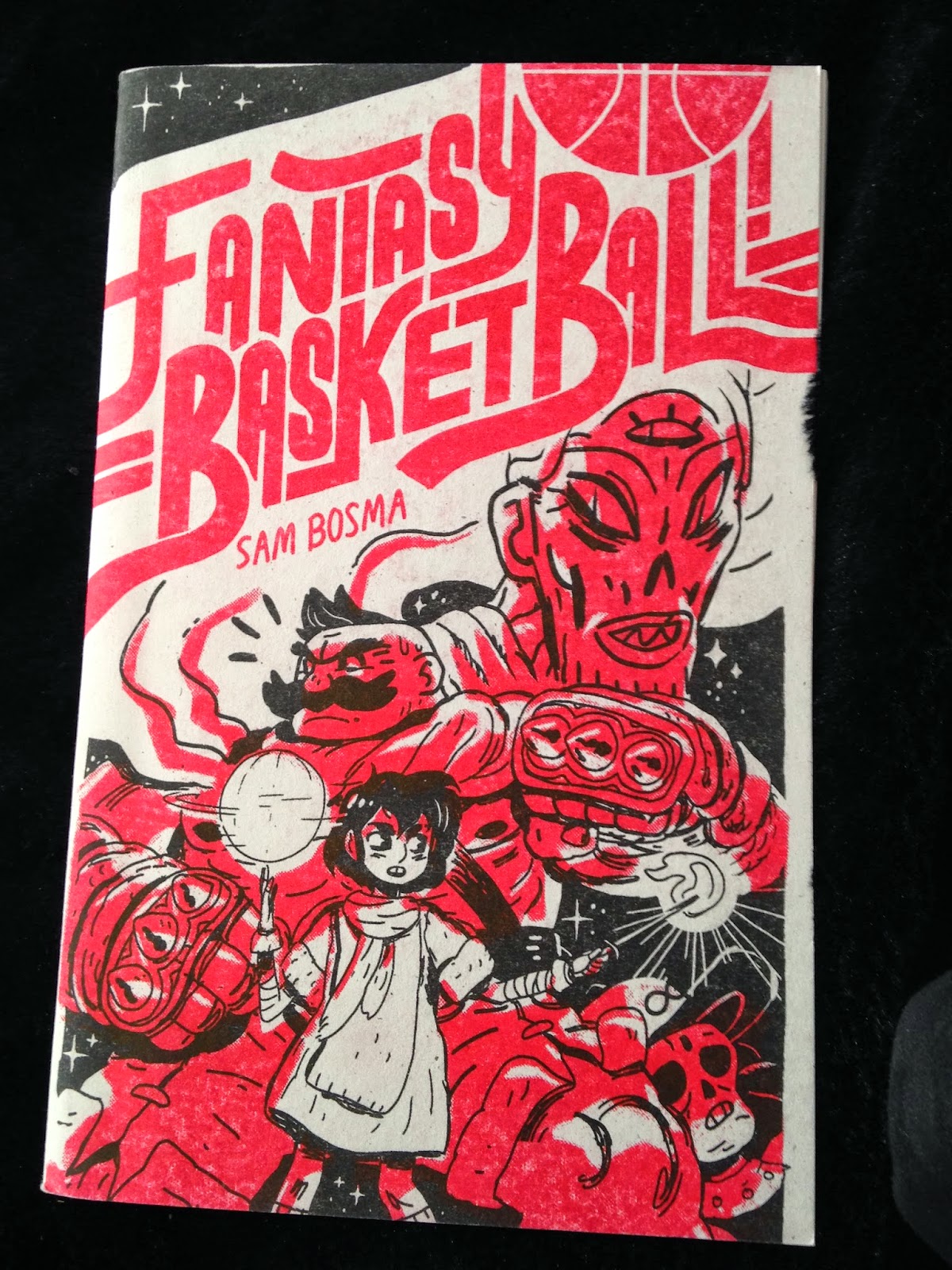 Ok ok after this no more comics with female protagonists I swear. But this is a cool fantasy story about a cool duo of adventurers Mean Mug and Wiz-Kid! Wiz is more of the protagonist of the story and the level headed one of the two. She’s an intern to Mug, actually. Together they delve into a dungeon to get some fantastic treasure, but the only way to get past is with…Basketball! It’s cool and weird is what it is. The art by Sam Bosma is cartoony and fantastic. It reminds me a lot of a Studio Ghibli movie, with super exaggerated designs, a cool female protagonist, and pretty in depth backgrounds with a great attention to detail. Also there is a mummy with a foot-tall high top and a skeleton captain, so that’s fun. You can get the digital version for 2$ or the print version for 12$!

The Other Gang by Wyeth Yates 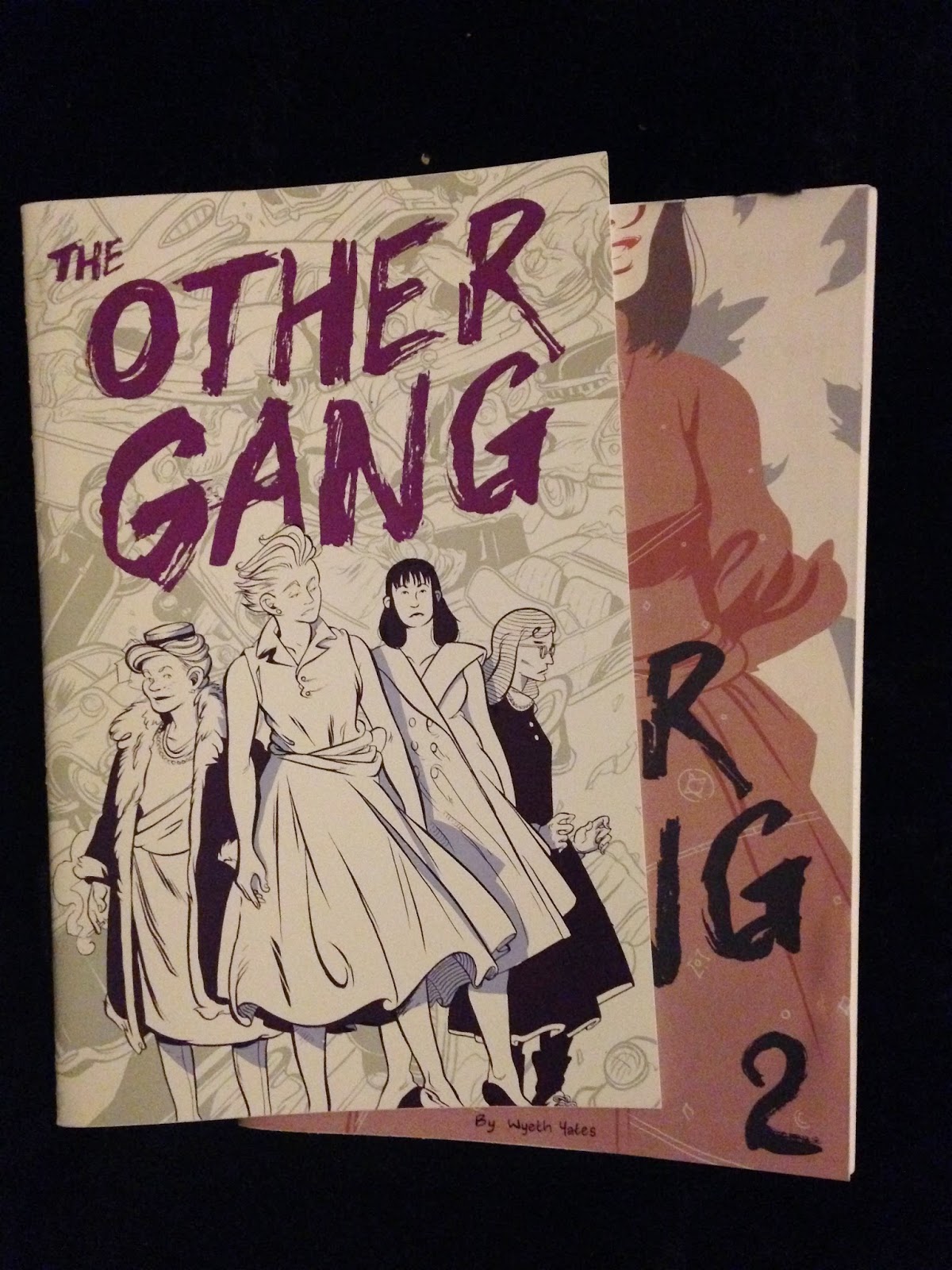 HAHAHA JK FEMALE PROTAGONISTS FOREVER HAHAHA OH YOU SHOULD HAVE SEEN THE LOOK ON YOUR FACES ah anyways, The Other Gang by Wyeth Yates is proooobably everything I want in a comic right now. It’s about a group of housewives in the 50’s who cross-dress as a male greaser gang. That is fantastic. There’s nothing I don’t love about that premise. Is it noir? Kinda? Maybe? Don’t care! Fantastic. It’s such a cool premise and he follows through with solid characters and a compelling story. Will they get caught? What happens if they get hurt? How will they explain it? Is this just used as an escape or does it mean something more? It helps that he’s got a great art style. Although I get two of the characters mixed up because they have similar faces and only slightly different hairstyles. But other than that, wow it’s a cool story. The first two issues are out, and you can download the first one here. Go check it out now! 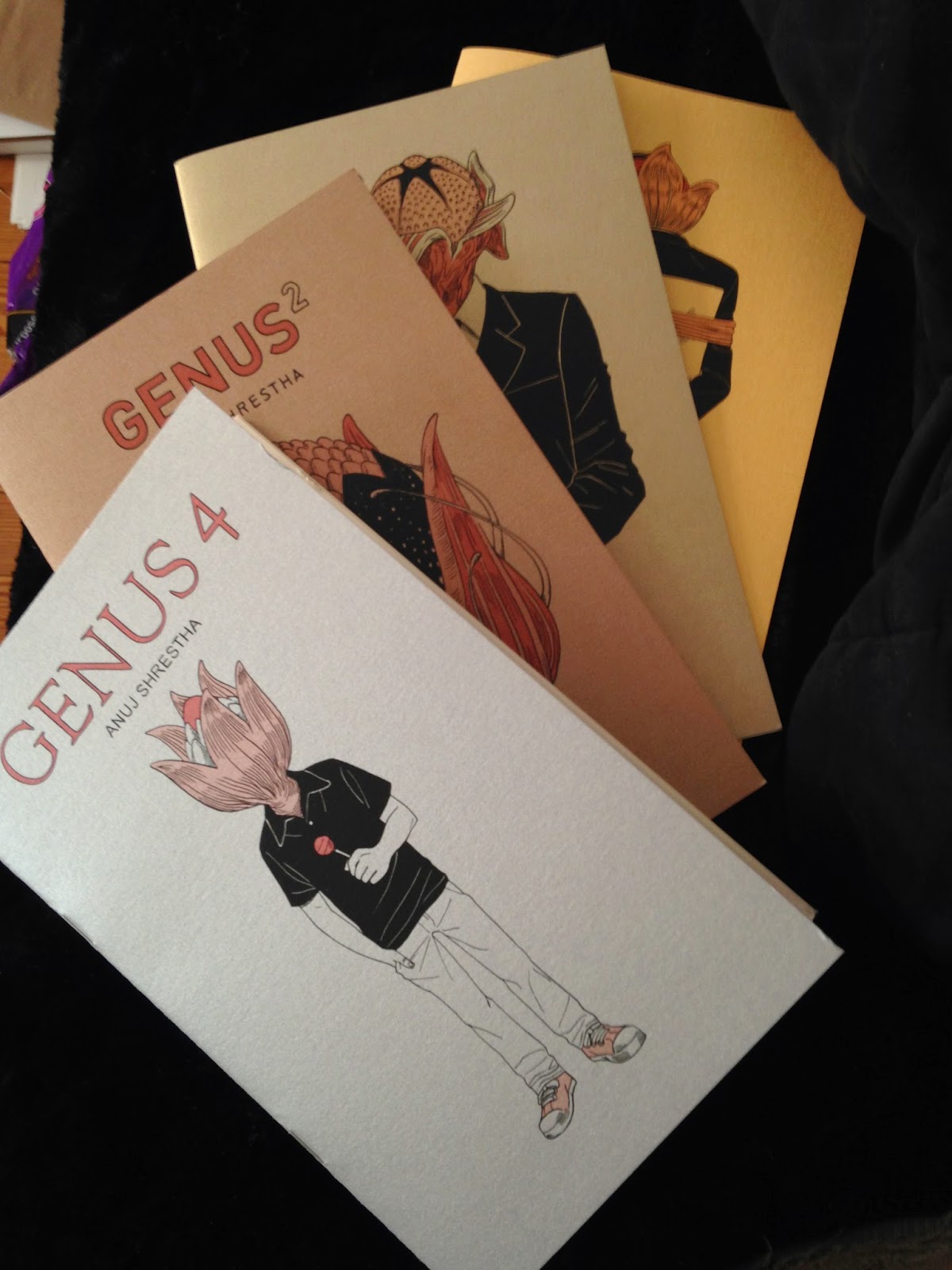 Genus by Anuj Shrestha
Genus by Anuj Shrestha is a weird book. It takes place in a world where apparently the upper class higher ups all have plants for heads, and everyone else is looked down upon? That’s what I’m getting so far. It’s kind of hard to tell exactly, but I get the general idea. There are 4 books out already, and what I love is that the 1st is a wordless comic. it’s a great, quick way of getting us introduced to the world and out main character, who’s just trying to get a high-paying job in the giant company Genus, maker of fine products. Things get weird(er) when he starts growing leaves and plant parts himself. It’s drawn in a very simple yet more realistic and serious looking style. The best parts are the details of the plant people, especially when they get a close up or a 2 page spread. It’s a weird comic and I don’t fully know what’s going on, and I kind of like that. You can get the books for around 6$ at one of these places, or see a preview of each on his art blog here.

Tales to Behold by Paul Hoppe 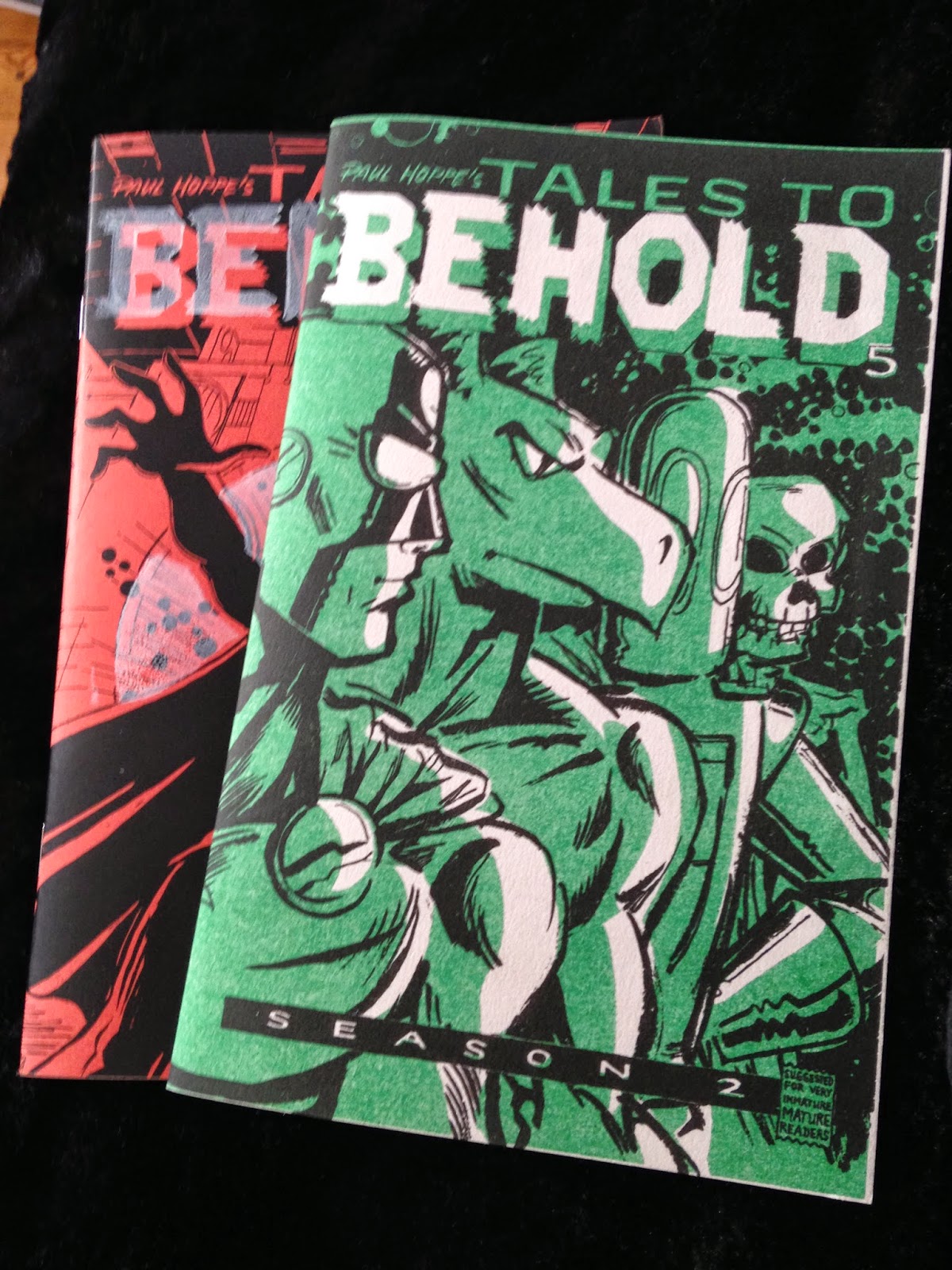 This feels like a cheat because I’ve been a fan of Paul Hoppe’s work for years, but I picked up his two latest books and I can’t NOT talk about them. If you’re new to his work, Tales to Behold and his early series(which you should also pick up), Journey into Misery is a ridiculous superhero comic that feels like it’s told from the 90’s underground comic perspective. It’s got adult humor, with characters frequently getting naked or having casual off-panel sex, and it goes to great lengths to make fun of the ridiculous continuity and constantly changing comic world. Heroes will be held in aquatic chambers, naked but in the right angle as to not show anything, only to then move slightly and ruin the illusion. Villains have to deal with bratty teenage daughters, heroes find their epic battles are cut short by silly solutions, and forth walls are frequently broken. Each book acts more like a magazine than a single comic, with different storylines, multiple preludes, interludes, epilogues and the occasional mini-poster. And it’s all held together by Hoppe’s fantastic art style, that’s loose, exciting and has great contrast. Right now there’s five each of both series, and I’d recommend starting at number 1, as they can get as convoluted as any Marvel or DC book, but that’s half the fun! You can buy them all for around $4-$6 here. 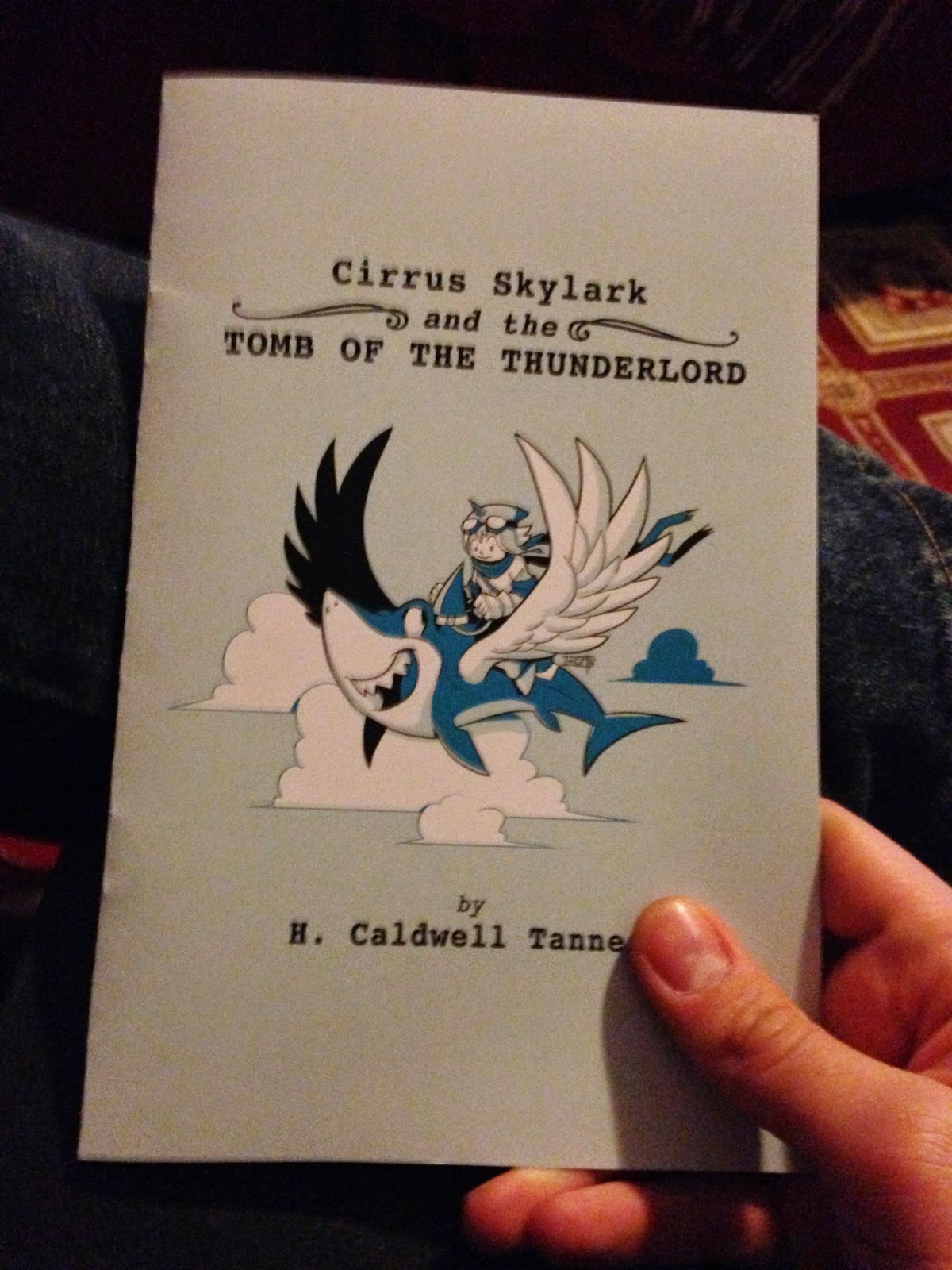 Cirrus Skylark and the Tomb of the Thunderlord by H. Caldwell Tanner
H. Caldwell Tanner does some fantastic work at College Humor and his own site, loldwell. But this is his own new story it seems, and while it’s a great little one-shot comic, I really hope he continues it. It’s about Cirrus and his flying skyshark(yes FLYING SKYSHARK) on a quest to find a map. It feels like a Zelda game but in the snarky style of College Humor. Caldwell is a fantastic illustrator, and it’s no different here. The design of everything is super fun and silly, and I love the monotone color-scheme. I could honestly read a whole book with this character. Or play a whole game. One of those things. You can read the whole thing here!

If you think these are all the books I got, you have honestly not seen me during a comics sale. I’ll talk about more of my stash in a later update! 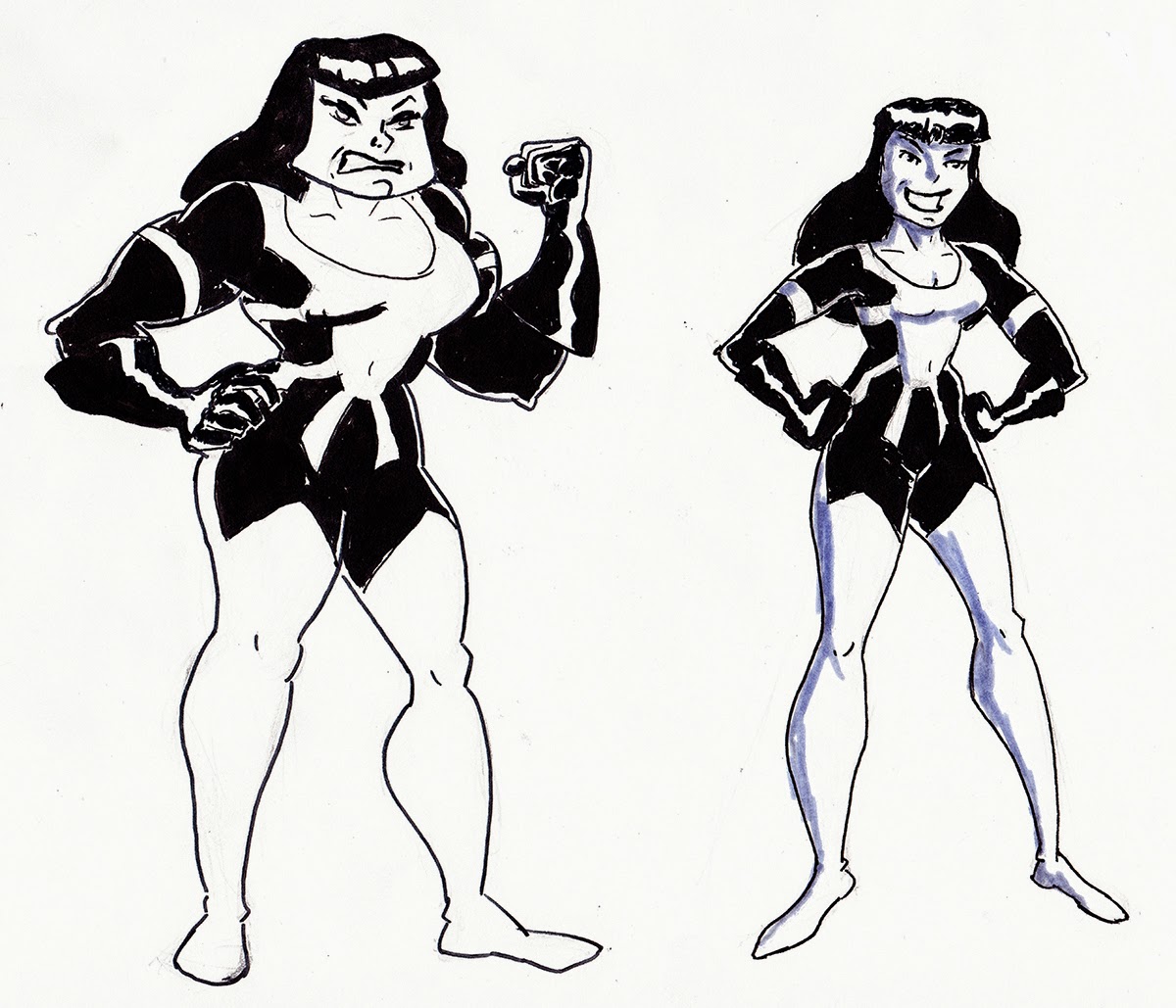 I really like the costume for The Queen in Spider-Man. I like how she's basically the perfect woman AND has psychic powers AND looks like Betty Paige. I also did big hulky version because she's apparently super strong? More sketches after the jump!

Hey it's Monday! Here be some sketches!

Have here some mock-storyboards I did: 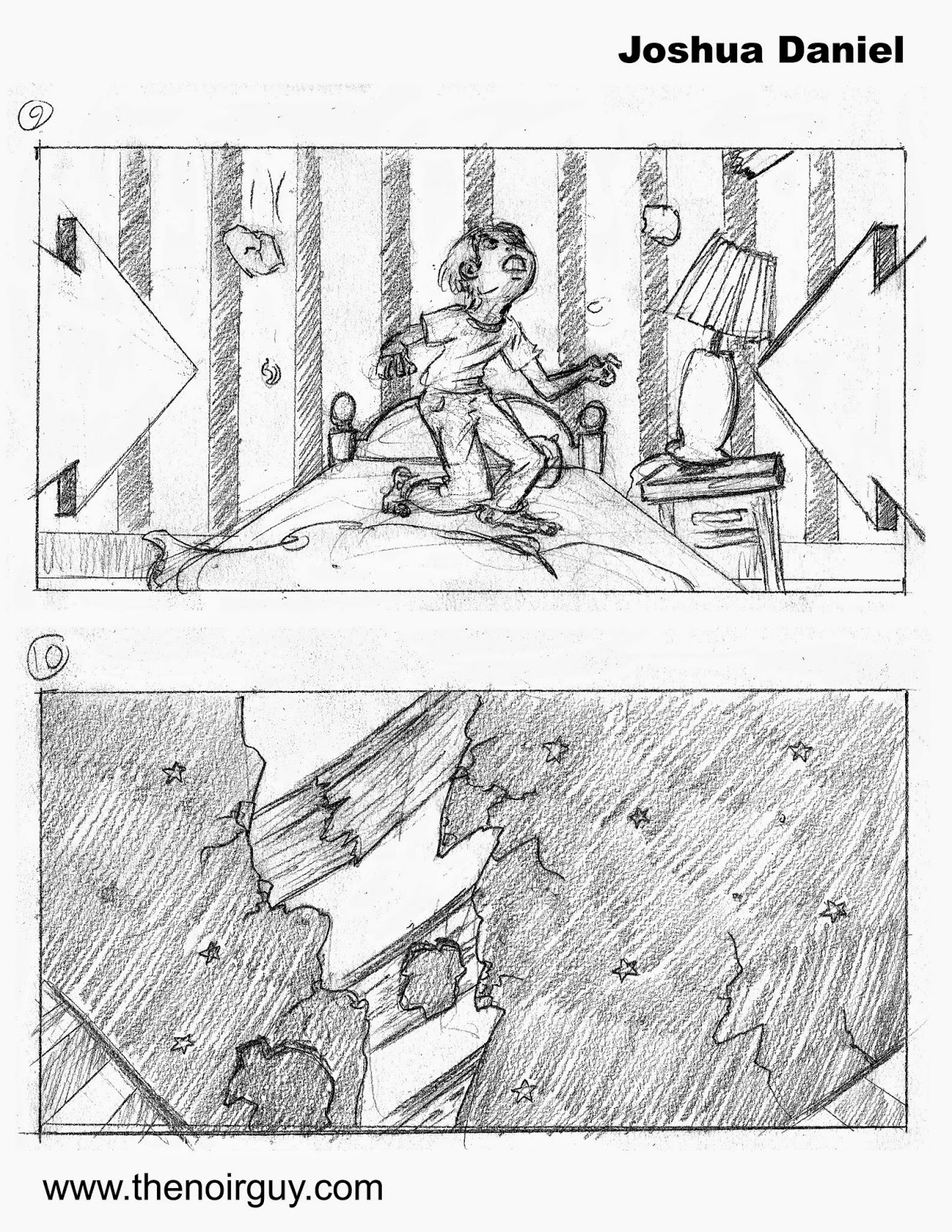