Yea, I have an intricate sticky note system( until I get a big-ass dry erase bored or until apple comes out with an I-Wall©) and it does make a lot more sense. But I'm always looking for new ways to simultaneously keep from feeling daunted by tasks, keeping track of what I have to do, and feeling motivated.

Also started on a new Dumgens & Draggins©, hope it turns out awesome.
Posted by The Noir Guy at 9:42 PM No comments: 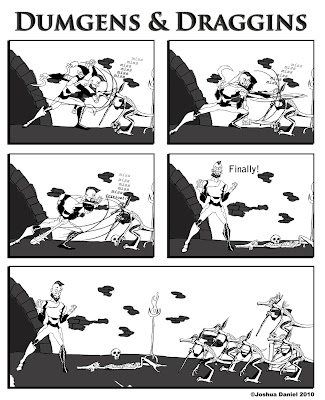 Here it is! Dumgens&Draggins #1! Holy balls man, a comic should not take that long. Or have that many photoshop layers. I'm hoping this will get easier in the future. HOPING.

Anyways, I love playing DDO, but this is one of the minor annoyances. When an enemy is harder, he doesn't get more HP, he just get's harder to hit, which doesn't really make sense from what I can see in the animation, I mean it LOOKS like my sword and sickle are going through him numerous times, but obviously my character only rolled a 5 or something. And kobolds are jerks. Hope you enjoyed it!
Posted by The Noir Guy at 3:19 AM No comments:

pop your collar, give you a dollar 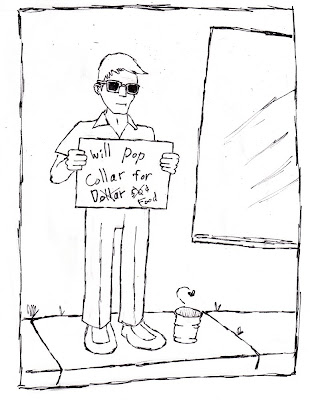 What would happen if douchebags were poor. I have no idea why I came up with this.
Posted by The Noir Guy at 10:17 PM No comments: 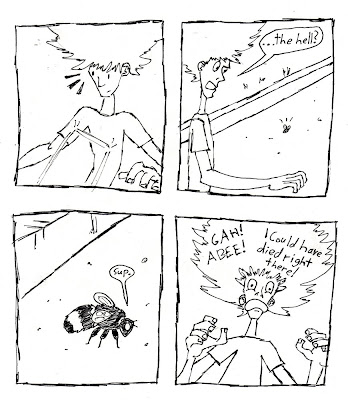 Ok, so maybe I didn't freak out that much, but honestly, when's the last time a bee just ricocheted off your chestal area randomly? I'm so glad I don't have boobs now. Imagine it getting stuck! That would be brutal.
Posted by The Noir Guy at 7:50 PM No comments: 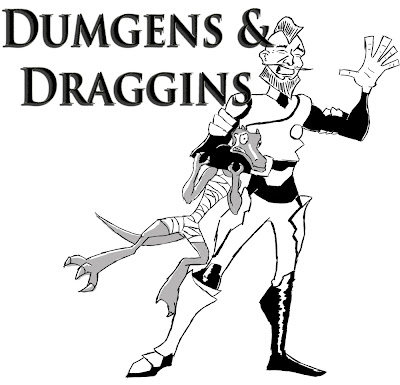 So or the past two days I've been trying to do a comic in photoshop, and for some reason I always think it's gonna be easy, until I look at my linework. Anyways, I've decided to try a new approach: 4 smaller pen comics mon-fri with one big photoshop comic at the end of the week! Until I can up my photoshop skills and churn them out faster (or practice more flash and illustrator), I think this will work out. Plus I'm half way done with it, so it seems like it's working out well so far.

Also, I might try a thing next month where I do a model from concept to nice render in a month because I definitely haven't been modeling enough.

Also also, with these new photoshop monstrosities, I'm introducing a new mini-series, Dumgens & Draggins© (thanks to Shannon for the name). I have a good handful of comics about my adventures in Dungeons and Dragons Online. I play a thief with a mohawk and a pirate beard (cartoonized above) and if you don't believe me, here's a screenshot: 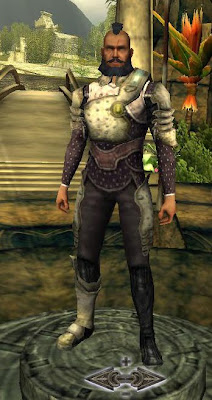 And here's my character pretending to play Assassin's Creed: 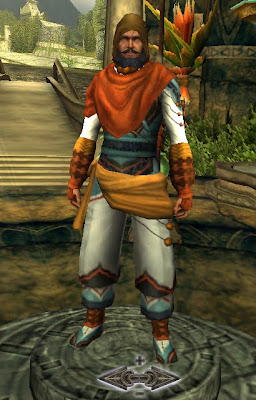 Hey, maybe these will get so good I'll transition them to RocketPoweredDragon when it's done! Wouldn't that be awesome?
Posted by The Noir Guy at 11:47 PM 1 comment: 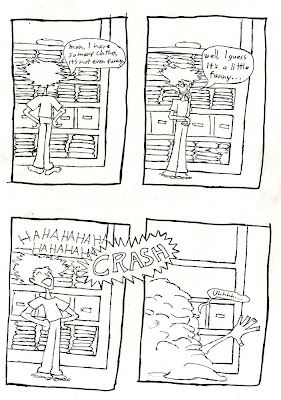 But honestly, I really do have too many clothes. Especially t-shirts.
Posted by The Noir Guy at 10:07 PM No comments: 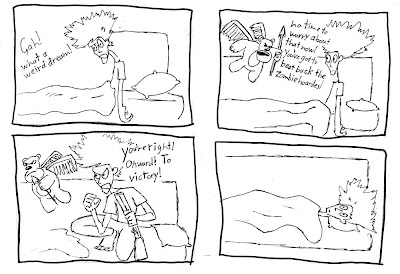 Don't you hate when you wake up from a dream only to realize later that was a dream too? Yeah man. Although, I don't think I've ever dreamed anything that trippy.

Also, here's a background I sketched at the library! 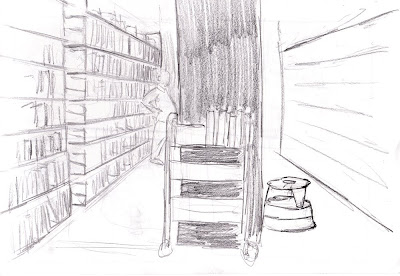 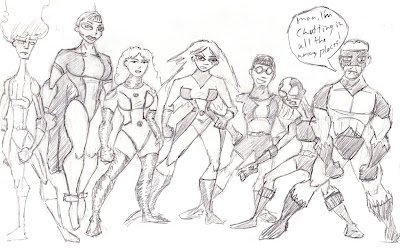 Man, not getting a bite from the comic bug this week. But, I did do a lot of sketching for the upcoming RPD heroes comic(and by upcoming, I mean sometime between now and eternity). Here's a sketch of the whole team if they all had superhero tights! Sure, this could work from a design standpoint, but a few of them don't really NEED tights. I think I'd rather go with an avengers "Band of Misfits" look rather than an X-men "shared color scheme" look.
Posted by The Noir Guy at 9:12 PM No comments: 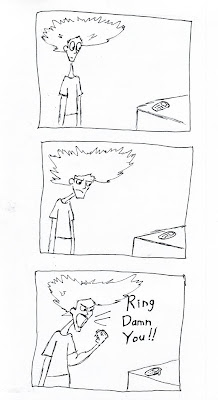 I hate waiting for a phone call.

Also, I bust my ass on the rickety animation and I have 3 followers, I spend an hour MAYBE a day on this and I get 7 followers. STORY OF MY LIFE. 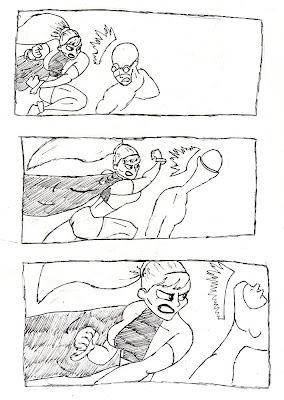 So yeah, I didn't have any good ideas for a normal comic today, so I just did some practice sketches of LolaFuerte© beating up some guy. She's one of the heroes in my upcoming RPD Heroes comic (name still in development). Who's the nameless henchman? All will be revealed in time (by me, later). 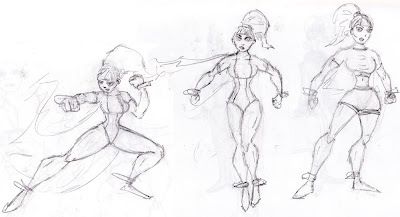 Considering whether to go with the "super suit" look or the "t-shirt and boyshorts" look. Leaning towards the supersuit because there's no way a t-shirt is indestructible. It could lead to some very embarrassing "costume malfunctions when bullets or giant lasers are fired.
Posted by The Noir Guy at 8:16 PM 2 comments: 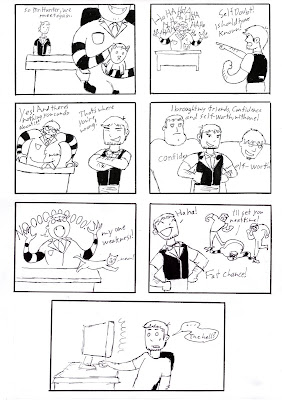 A special strip celebrating Joe Hunter's early Birthday (on Sunday)! If you don't know about him (he's on my links list to the left, Journalin Comix), he does a daily comic like me, except his illustrations are actually good. Very sleek and simple. I hear he's also doing a graphic novel. You should check him out!

Happy early Birthday Joe! Thanks for all the great comics!
Posted by The Noir Guy at 11:42 PM No comments:

how to make a daily comic 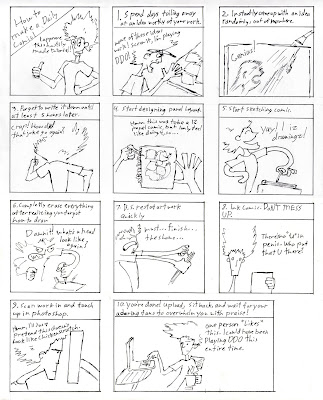 Man, if I had a huge fan base, they'd be shitting squirrels over this comic. Not only is it one of my biggest comics, it's also a throwback to a bunch of previous comic designs! And, yes, that is the exact drawing process for me.

Oh, and for those who don't know, DDO, or Dungeons and Dragons Online is free MMO. It's actually pretty fun, and I think I might be getting sucked in. I'm fairly certain though I won't turn into one of those fat shutins because every time I try to get farther in the game I get mauled by Kobolds. Or Orcs. or Spiders. Or random guys with knives. SO MUCH FUN.
Posted by The Noir Guy at 11:23 PM 1 comment: 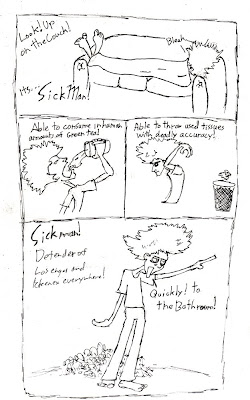 Yea, not feeling so great.

But in other news, did you hear about the campaign to get Donald Glover to play Spider-Man? It's pretty awesome. You should join. He's much better than those 5 other guys.
Posted by The Noir Guy at 9:51 PM 1 comment: